From the time he kicked the first ball (he was three years old then), Arzan Todywalla never liked to set goals in Football.

For him, every strike to hit the goalpost and every team that he represents should win.

Never known to raise a tantrum or his voice, the 18-year-old has earned more accolades, cups and medals for the teams that he has represented at schools and clubs than anyone else in his group or class.

We have often said that Arzan is a rising Star but he can now be called a Phenomenon.

Because, victory is almost assured to any team that features him.

And 2019 was yet a record year of achievements, not just for him but for everyone associated with him- his colleagues, coaches, clubs and the school, not to forget his family.

The Saint Kentigern College First XI Team, in which he was the most important player, won the Auckland Premiership Title for 2019.

He scored 15 goals (staggering!) at the School League and received the Golden Boot from the Auckland Secondary Football Association for the feat.

Arzan was the Captain of the Eastern Suburbs Youth League 2019, and playing against Team Wellington in a nail-biting last game of the season on December 7, 2019, he scored a hattrick, which was not of course the first in his impressive career.

Having completed his graduation at Saint Kentigern, Arzan is considering the options for his future, and like hundreds of others, we anxiously await his decision.

It is a matter of gratification and pride that Arzan has impressed every coach and selector at every club in New Zealand, Australia and the United Kingdom where he was invited to play over the past few years.

He was in the first batch of three-day trials held at the Sunbury Football Club in Melbourne from January 11 to 13, 2019.

Arzan was grouped in the Over 17 Players and was pitted against 26-year old ‘veterans.’ But he has proved his mettle in the Men’s team at Fencibles Club AFC in Auckland.

Chris Woodburn, who was a Referee at the Trials, told Arzan’s parents Viraf and Pearl Todywalla, “Arzan is good; very good. There were a handful of players who got the attention of the coaches and Scout Micky Adams and he was one of them. You should surely consider the option of his admission to one of the top UK Schools, play for the School and train in the best and most professional environment to become a professional footballer.”

Addressing Arzan as ‘Number 21,’ the number assigned to him, Micky Adams said, “I am very impressed with your pace; your pace is your main asset. Although you need to learn and improve on how and where to use your pace in a way that would benefit you the most, I can tell you that any team in the UK would love to have a player with that pace and skill. Your parents should speak to Chris (Woodburn). Well done.”

UFA Licensed Coach and Lecturer Ashleigh Hopkins said that Arzan has ‘what it takes to be a good Soccer player.

“Arzan, you have a long way to go. If it was upon me, I would take you right now in my team in the UK. You have exceptional pace; you listen, train and then perform. I am happy.”

While Arzan’s steady rise as a spirited Football player is a direct result of his diligence, devotion, daily practice and most important of all his humility and eagerness to learn, the contributions and sacrifices of his parents Viraf and Pearl Todywalla are significant. They have been the true architects of the young man’s rise. As well as investing time, money and efforts to ensure that their son is well-nourished and healthy, they spend all their spare time and weekends to reach him to playfields and events that further his interest in the game. They also constantly look for opportunities for Arzan to receive further training.

It was this watch out of Mr Todywalla that takes their son to participate in various events around the world.

Getting to places is not cheap but the Todywallas pool their savings and ensure that Arzan gets the best training possible.

With such love and care of parents and his own dedication and talent, Arzan can be assured of his bright future. Consistency and humility should continue to accompany him. 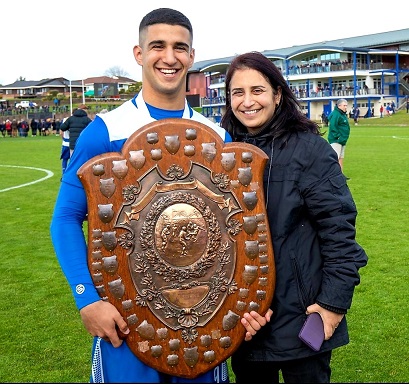 Arzan Todywalla holding the Winners Shield of the School League with his mother Pearl Todywalla. He scored 15 staggering goals and also won the Golden Boot from the Auckland Secondary Football Association (Picture Supplied)