Star collision
The researchers say that the event they observed occurred about 130 million years ago as two neutron stars were in their final moments of orbiting each other.

As the stars spiraled closer together, they distorted the surrounding space-time, giving off energy in the form of gravitational waves before smashing into each other. As they collided, they emitted a “fireball” of gamma rays; the new observations show that heavy elements such as lead and gold are created during these collisions.
More information about the discovery is available on scimex.org for registered journalists. The Australian Science Media Centre will be running a briefing on Tuesday, October 17 at 11 am NZT; see information about how to dial into the briefing.

Professor David Wiltshire, Department of Physics & Astronomy, University of Canterbury: The first discovery of gravitational waves from the merger of two neutron stars is an historic event. It is every bit as exciting as the first discovery of gravitational waves from merging black holes! Since this involves neutron stars that radiate light, for the first time we can also see what is going on in an extreme astronomical event that shakes up space-time.

Cosmic mysteries open
This merger has been followed up by satellites and telescopes all over the planet.

In one hit it solves a cosmic mystery – the origin of short duration gamma-ray bursts. We have seen flashes of gamma rays – like the ones that the Fermi satellite saw from this event – for decades without knowing what they are. Now we know. (At least in some cases!) But the event opens up other cosmic mysteries.
That is the nature of science. We will be learning new things for decades to come. It will be one hell of a ride.
One further cosmic gravitational wave first still awaits us: the merger of a black hole with a neutron star. Such events should also give out light and other electromagnetic waves. And they will be different to anything we have seen yet. When that happens, it will again open up completely new frontiers for 21st-century astronomy.”

Dr J J Eldridge, Astrophysicist, University of Auckland: GW170817/GRB170817A/SSS17a was the event many astrophysicists have been waiting for since LIGO made the first detection of gravitational waves in 2015.

This time we did not just detect the gravitational waves from two merging neutron stars, but have also seen the associated gamma-rays, optical light and radio emission from the possibly black holes and from the two exploding stars.
This new discovery shows again the importance of LIGO and VIRGO’s work over decades. The refinement of their highly sensitive work allows us to be able to detect these gravitational waves.

Not the full story
We don’t even know the full story yet. The observations are ongoing and only in the coming months and years will we really begin to fully understand how exciting this object is. The fact that we have so much information from so many different sources will allow us to piece together in a way we have never been able to before. It would take more time and effort!
This event alone has already answered questions on the nature and structure of neutron stars and confirmed that merging neutron stars look like we’ve always expected them to, as a short gamma-ray burst and a type of explosion called a ‘kilonova.’
The observations of the kilonova, the explosive afterglow, also confirms something else. In the explosion we have seen evidence for large amounts of heavy elements. These events mostly create elements such as gold, silver and platinum. In this particular event, it’s likely that 1900s or 1900s of Earth masses of gold and other elements were made. If the rate of neutron stars mergers is as high as we now think, these dying stars are now the source of most of these elements in the Universe.
We are all made of stardust, but gold, silver and platinum are made of neutron stardust!

Kiwis in low key
Researchers in New Zealand have not played a role in the detection of this event but we are highly interested in gravitational waves. For example, at the University of Auckland Assoc. Professor Renate Meyer has worked on the problem of extracting the faint gravitational waves signals from the much larger terrestrial signals that jostle the instrument, a problem that is like trying to hear a whispered conversation in a noisy room.
While in my own group, a PhD student John Bray and a MSc student Petra Tang are working to predict from models what the rate of these events should be, this event is showing that our models need to be improved to match the high rate of such mergers we now expect in the Universe.

Professor Matt Visser, School of Mathematics and Statistics, Victoria University of Wellington: The LIGO-Virgo collaboration is to be congratulated on the first parallel detection of a neutron-star/neutron-star inspiral and merger in both gravitational waves and electromagnetic waves (gamma rays, optical, and radio).
From my personal point of view; the most important point is that this gives us an independent way of measuring cosmological distances, independent of supernova physics.
We now have an independent way of checking/verifying the accelerated expansion of the universe.
Conclusive demonstration

While this is only one data point for now, surely more will follow. This type of observation will give us a new way to measure the Hubble parameter, deceleration parameter and so on.
A second critical point is that this observation rather conclusively demonstrates that at least some gamma-ray bursts, (GRBs), specifically some of the ‘short’ GRBs, are caused (as was expected) by neutron-star/neutron-star collisions.

Other implications
There are also many other implications — from the ‘cooking’ of heavy elements (heavier than iron) in the subsequent kilo-nova, to direct precision tests on the speed of gravitational waves (expected to exactly equal the speed of light).
It is expected that this observational technique will quickly become a standard part of mainstream astronomy, we hope to see many more of these events over the lifetime of the LIGO-Virgo project and its successors.

Associate Professor Renate Meyer, Department of Statistics, University of Auckland: With the recent stunning detection of a binary neutron star merger, Advanced LIGO/Virgo have ushered in an exciting new era of astrophysics that highlights the importance of effective collaborations between gravitational wave observatories and other electromagnetic telescopes such as Fermi GBM, INTEGRAL, Chandra, Hubble, Swope and DECam
Several questions answered

Arguably, this detection and its follow-up observations of gamma rays, X-rays, ultraviolet, optical, infrared, and radio waves have an even higher significance for fundamental physics than the very first detection of gravitational waves in September 2015.
The new event confirmed many significant hypotheses that had only been conjectured before, for instance the origin of short gamma-ray bursts, the production of heavy elements such as gold in the universe by binary neutron star mergers, an estimate of the Hubble constant, independent of the cosmic distance ladder, and that gravitational waves travel at the speed of light.
From a statistician’s perspective, statistical noise characterisation has proven important for accurate estimation of waveform parameters such as the luminosity distance and sky location which allowed the telescopes to zone in on a localised region of the sky.
A truly exciting new era for astrophysics with the promise of many more discoveries to be made!”

A map of the approximately 70 light-based observatories that detected the gravitational-wave event called GW170817. On August 17, the LIGO and Virgo detectors spotted gravitational waves from two colliding neutron stars. Light-based telescopes around the globe observed the aftermath of the collision in the hours, days, and weeks following. They helped pinpoint the location of the neutron stars and identified signs of heavy elements, such as gold, in the collision’s ejected material. 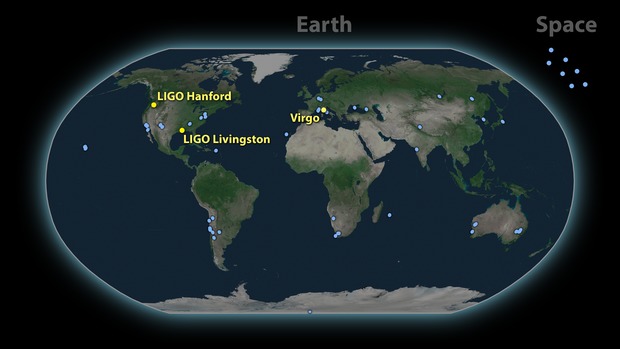