Halting crime across the borders

Over the past 10 years, New Zealand Police’s cooperation with overseas partners has expanded, and we remain committed to working closely with our friends and neighbours across a number of areas.

A focus for New Zealand Police is working with strategic partners at home and overseas to tackle the challenges affecting people’s lives here and across the region.

Partnerships are vital to Police’s work and the benefits are many.

There is no greater illustration than the response to the terror attack of March 15, 2019, in both the help received from overseas law enforcement partners and the strong support for Police among ethnic communities in New Zealand.

Partnerships underpin Police’s purpose, which is that all New Zealanders are safe and feel safe. Reducing crime and the harm it causes, and holding offenders to account, are essential to achieve that goal.

Crime crosses borders and so must the Police response.

The Pacific, with so many small nations in so much ocean, has long been a target for criminals – firstly seeking access to the more affluent countries of the region, such as New Zealand and Australia, but more recently also targeting vulnerable people in Island states.

We share security challenges with many other countries – particularly in the Pacific region – and we acknowledge a collective responsibility to build policing capacity and capability across the region to keep our people and borders safe. 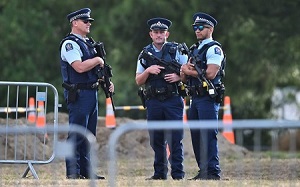 We have a network of liaison officers based in key strategic postings places across the world – Washington DC, London, Bangkok, Beijing and Suva, to name a few.

In addition, our people are engaged in many projects in the Pacific, helping build capacity and capability with a particular focus on community policing –that is an area where we have an excellent international reputation.

Police relies on strong relationships at home and overseas to stay ahead of changing trends in offending.

Around the Pacific, we work to combat transnational organised crime, terrorism and money laundering – and many other challenges.

At home, the New Zealand Government’s allocation of extra funding to Police means more staff will be allocated to investigate, disrupt and dismantle serious organised and transnational crime.

There have been many recent success in which Police’s work with partners at home and overseas has led to the seizure of hundreds of kilos of methamphetamine and other drugs; millions of dollars in cash; and the restraint of assets subject to forfeiture proceedings as suspected proceeds of crime.

These all represent a huge amount of social harm prevented, as drugs seized fail to reach their intended targets and people involved in their importation or manufacture are held accountable for their offending.

Despite the big picture, broad-brush nature of transnational offending, the harm is felt by individuals and their communities at the ground zero of organised crime.

Those communities are increasingly joining forces with Police to support people affected by crime.

In Northland, for example, Te Ara Oranga is a methamphetamine harm reduction programme involving Police and other agencies; in the Bay of Plenty, Oho Ake is a partnership with Tūhoe iwi that seeks to steer young offenders away from crime.

Tūhoe also provided valuable support in a 2018 operation targeting Mongrel Mob methamphetamine dealing in the Bay of Plenty town of Kawerau – a model of cooperation reducing the impact of a large-scale police operation in a vulnerable community.

There are many other examples throughout New Zealand of communities stepping up in partnership with Police to repair the damage caused by crime.

Our mission is for New Zealand to be the safest country and our operating model is Prevention First – we take every opportunity to prevent harm occurring.

This applies beyond our borders as well as at home: we are determined to be good neighbours and share our experience and expertise with the other nations of the Pacific, and beyond, for the benefit of all our communities.