Are we doing enough to empower our women to excel in their chosen profession?

There is still room for improvement to empower women to excel in their chosen professions.

Research demonstrates that unconscious gender bias works against women as they advance in careers, particularly in fields that have typically been occupied by men.

While women, in general, have expanded their career aspirations into previously male dominated fields (such as accounting, medicine, law, etc), that has not necessarily meant acceptance and equality.

It is interesting that while employment has been shown to have a positive effect for women and their families, however women continue to encounter a number of difficulties and misconceptions that affect their performance or ability to excel in the workplace.

Leadership style, gender stereotyping, stress caused by role conflicts or multiple roles, work/family disagreements are all challenges that have been identified in research as barriers for women excelling in the workplace.

I believe that it is only in the last few years that employers have really begun to make moves to remove unconscious bias in decision-making processes that inhibits women’s progression to excel, or move ‘up the ladder,’ for example, reviewing hiring practices, measuring gender balance, including family-friendly policies, and setting targets for change.

Upskilling senior leaders to understand their bias, and actually acknowledging that there are challenges in workplaces that make it hard for women to excel seems to be a more common problem.

This can be due to those in leadership positions, the decision makers of companies, coming with their own cultural or personal bias with which they have been raised.

Where does gender bias come from?

Why do people think this way? 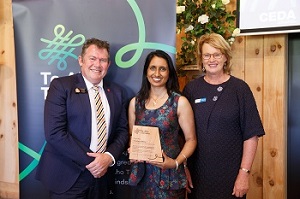 Gender bias and the way you think is shaped from an early age, and from your cultural context – your background, the influencers you grew up with and learnt from – our parents, wider family or whānau members, your schooling and cultural background.

Your thinking about gender and the difference starts from a young age.

Toys like science kits, Legos, building blocks which are mainly targeted towards young boys; versus soft toys, kitchen sets and barbie dolls which have been given to and played with by young girls. Toys and some games pushes stereotypes that women should be caregivers, while men should be in higher-paid professions like science or engineering.

What you see and listen to also shapes your thoughts of what you ‘think is right,’ or what ‘is normal.’

When we understand this, and realise that maybe not everything we thought ‘was normal’ for boys and girls, or for men and women, is actually fair and equal, we can begin to see what our bias is, and then make the decision to alter this thinking, and apply this at work.

We need all workplaces, and leadership in workplaces, to scratch below the surface, see where they still have problems, and start conversations about what they can do every day to change these outdated social norms that lead to inequality.

If we want to see meaningful change, both men and women are responsible.

It is not enough to enlighten and empower women and expect others to follow.

By valuing and respecting everyone – free of gender stereotypes and constraints, we may be able to overcome the bias of gender inequality, and begin to bring fairness to our workplaces.

When we start to recognise the subtle ways we still stereotype ourselves and others, we can start to break down barriers and truly excel.

Vanisa Dhiru is National President for the National Council of Women New Zealand (NCWNZ). She is the first woman of Indian origin to be elected to this office. Founded by Kate Sheppard, NCWNZ is an umbrella organisation leading the Gender Equal NZ campaign. She was acknowledged as a New Leader of Te Aho Tamaka Programme at an event held in Palmerston North on December 11, 2019.

Te Aho Tamaka is a New Zealand-First initiative that celebrates accomplished leaders who are recognised for making a difference in New Zealand and globally, are proud of their connection to Manawatū and are creating a legacy through their work in business, sport the community and more.