“Radio and television are most important and most effective means of mass communication. Television is probably the most effective means of mass communication. It has a great power for good or for evil; it has a great power for enlightenment of people. In a bad sense, it has great power when used for propaganda purposes. It is particularly effective and dangerous as a political and social weapon especially when a monopoly is running it. It is more dangerous still when that monopoly is under political control. Absolute control of this medium of communication can be used to produce almost any attitude of mind.”

The above statement was made by former Broadcasting Minister Arthur Kinsella as Parliament debated to establish the New Zealand Broadcasting Corporation, the predecessor of TVNZ, RNZ, NZ On Air and, most non-print media in New Zealand.

Today, Kiwi consumers have a plurality of voices for entertainment, news, opinions and stories from the local free community newspaper to subscription online digital media streams like Netflix and Neon.

The way New Zealanders are consuming content is changing and that is a good thing for consumers but a challenge for those working in the sector to stay agile to the continually evolving media landscape.

In New Zealand, a number of media companies are projecting downward trends in profits and audiences.

The cost of high quality local content is near prohibitive without support from the Crown-funded NZ on Air agency, even though more than ever before New Zealand is consuming media content from across our country and sharing it with the wider world, there is a real struggle for local content creation in our country.

While some may herald this as merely changing audience preferences for what can be perceived as higher quality overseas programming there is also a growing concern in the loss of local journalism and, with this, a loss of our local news, local reporting and with all of it that, the potential to hurt our democracy.

Earlier this year I cautiously welcomed an initiative by RNZ, NZ on Air and the Newspaper Publishers Association to pilot a local democracy reporting initiative to ensure the proceedings of our regional councils, community boards and elected trusts get covered but this in itself does not answer the wider questions facing media in New Zealand.

In New Zealand today we are at a crossroads. Decisions need to be made about how we decide to publicly fund those stories that are not commercially viable.

Traditional broadcasters are merging, selling up or facing cost pressures because they are unable to adapt to the evolving media landscape.

Some of these problems are a natural progression of the market that companies must face as part of doing business.

In the past several years, media companies have asked the government for help and been turned away while others have gained help only to still fall at the knees, others have tried to themselves only to be hindered by rulings again mergers on the grounds of anti-competition.

This situation is untenable and serious questions must be addressed to resolve the way media and journalism can operate in New Zealand.

For a long time in our country, the state had a monopoly on the what, who and how of radio and television broadcasting and then 30 years ago, TV3 entered the scene.

TV3, after several owners, bailouts, near bankruptcies and collapses is once again up for sale and its future is in doubt.

Some say that the current nature of TVNZ as a commercial entity needs to change while others say it should be sold off by the Crown to focus on other initiatives.

With all this, we have had the Government spending more than two years, several Ministers and several working groups attempting to find a solution.

I won’t speculate what National’s position will be on those issues until I know what the Government is going to decide but what I do know is two years is too long for this question to have been left unsettled by the Government.

This is because today the plurality of global broadcasters, media content creators and digital innovators is without question flourishing.

As a former journalist, I am proud of the way New Zealand is stepping up internationally as a global partner and consumer.

With these new markets come new ways we can share our content not just locally but internationally.

In Auckland, Amazon has commissioned studios in Kumeu to prepare the latest Lord of the Rings instalment which will air on Amazon Video.

In Wellington, studios and production houses alike from Miramar to Avalon are bursting with the latest Hollywood blockbusters and this all means our economy grows and New Zealand benefits.

If you ask the average New Zealander how they get their content in the each of the preceding several generations, they would have typically said, Newspaper, Radio and then Television respectively.

Today, all those lines of content still ring true with a multitude of additional digital media options to access local and global news, entertainment and ideas.

As the 2010s end, we face an remarkable future for all broadcasters and content creators who are willing to adapt to an ever progressing advancement in the way people seek knowledge and learn new ideas or stories.

Sixty years ago, Sir Jack Marshall commented upon the establishment of television broadcasting in New Zealand that “Television is a much more intimate and compelling medium than any we have at present,” I do wonder what he would say today about the impact of Twitter, Tik Tok and other social media services on politics and opinion in general.

The main issue at the heart of the convergence of traditional, digital and innovative media and broadcasting for many concerned is the supposed threat to high quality journalism and truth of information. 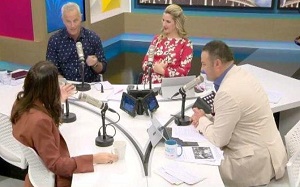 It is well known that digital algorithms are increasingly shaping what is on our screens and with that, what we may choose to think, and how we interpret fact from fiction.

There are no simple fixes nor are there easy answers to resolve the wide array of growing philosophical, moral and ethical questions facing the future of media but as a democracy we are fortunate that the plurality of voices in New Zealand will remain strong being vigilant in the fight against misinformation, the abuse of editorial trust and assert ourselves as a people who believe in truth above all else.

As Kinsella said in 1961, absolute control of this medium of communication can be used to produce almost any attitude of mind and it is vital the Government does not overstep, while making sure the people can see misinformation for what it is.

After all, one of New Zealand’s most beloved radio stations, Radio Hauraki, was established to counter the Government’s interference in journalism and such values today should continue to be commended as we seek a better freer media landscape for all to thrive within it.

Melissa Lee is Member of Parliament on National List based in Mount Albert, Auckland and the Party’s Spokesperson for Broadcasting, Communications & Digital Media and Ethnic Communities.